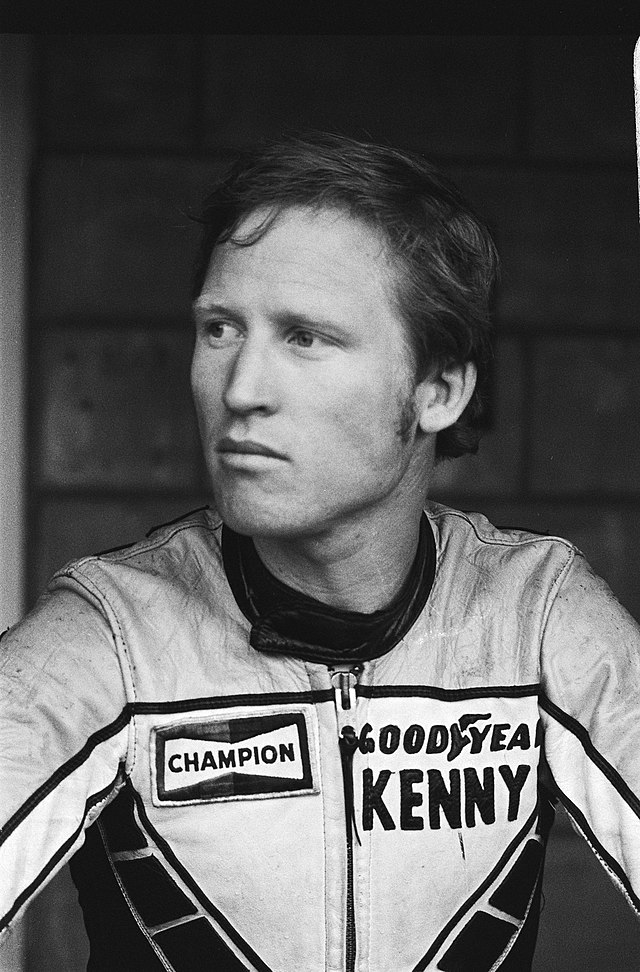 Kenny Roberts was born in 1951; he is an American motorcycle racer. He grew up in a very rural environment. Roberts was not interested in bikes right away but rather in horses. It was only at twelve that a friend of his challenged him to ride a small motorcycle. This first experience enchanted him, and he built his bike by attaching a land mower engine to a bike frame.

He first began racing in motocross races and immediately showed a natural talent for the sport. He was very comfortable and was starting to catch the eye of more experienced racers. Jim Doyle, an aircraft pilot, and amateur motocross racer became Roberts' manager and pushed for him to become a team-sponsored rider. In 71, they were denied by Triumph because they believed that the American was too small for the brand's motorcycles.

He turned to the American branch of Yamaha, and they agreed to sponsor the now nineteen years old Kenny Roberts; they also allowed him to work and be advised by a former 250cc champion, Kel Carruthers.

After winning many races and even a Regional Championship, he started in Europe. He first compared himself to the multiple champion Giacomo Agostini during a Daytona race, and in April 1974, he participated in his first road race in Italy. For this competition in Imola on a 750cc, he still competed against Agostini and finished 2nd. Despite this defeat, this first European experience left a mark on the American, who said that the enthusiasm of the Italian fans marked him, especially the number of spectators by the trackside. He continued to race in Europe and the United States, where he won several more Regional Championships before dedicating himself to the road racing World Championship. His move to Europe was largely motivated by his team, Yamaha, which was no longer able to compete against Harley-Davidson; they then offered him to move to road racing.

He arrived in 1978 with the financial support of Goodyear tires. He was set to race in 250cc to try it out, but after the double champion of Suzuki, Barry Sheene, said of Roberts that he was not a danger, it convinced the American to take part in the 500cc Championship.

Little thought him capable of winning, and yet. He will show a completely different way of riding from the rest of the field, and instead of breaking as late as possible in the corners, he was braking very early and then accelerating just a little, letting the bike slide on the track.

This style that strongly reminded people of motocross shocked the road racing world because it had never been done before. It was a good idea as he managed to be the fastest on track. The opening season went well for him. He managed to win for the first time in Austria, then France, and Italy. He and Barry Sheene led the title race, and the suspense remained until the last race. By finishing 3rd in front of Sheene, Kenny Roberts became the first American World Champion and proved to everyone that he was as talented as the Europeans.

Roberts is known for revolutionizing motorcycle racing in several ways; one of which was his riding style. 'The Martian' as he was called from his beginnings in Europe, particularly in Italy, a photographer, Franco Villani, said: "he is not very tall, dressed in yellow and clearly he does not come from the same world as us."  When he was asked about the champion's nickname, he will later be called 'King Kenny.' Roberts introduced a very impressive way of riding that is essentially the same as on a dirt track. He also began to shift on the bike and put his knee on the ground while taking corners to turn more easily. That way of doing things forced him to stick his sliders, knee protection, with tape so that they held in place.

He also uses his notoriety to promote the American Championship, and he returned every summer during the break to participate in races in his native country.

In 1979, the American began to make his voice heard, which strongly displeased the FIM. After his appearance the previous year, he did things very differently from all the others. He was seriously injured at the beginning of his second season, and when he returned to the track, he had a very good race and finish on the podium. Arriving in Spain, Roberts needed to win and participate in the race to stay at the top of the Championship board, but the organizers refused to pay him. Enraged, the Martian took the start and won, but he refused to take the trophy handed to him on the podium, which earned him probation. He received a second probation in Belgium after he and the championship leader refused to race because they considered the track unsafe as it had been resurfaced only 3 days before. Indeed, it was still full of oil particles, making the motorcycles slide. In England, his bike broke a few minutes before the start. After they rapidly fixed it, he arrived on the grid, his gloves covered with oil. His hands slipped on the handlebars throughout the race, but after a battle considered as one of the best of the 70s, he managed to win his second championship title. While he was again crowned, he threatened the FIM to create, in association with other drivers, a new championship called the "world series" to compete with the FIM if they did not change things. The drivers did not go as far as the creation because of a lack of organization, but they forced the FIM to change the safety rules so that they were stricter and ensured that drivers were paid more and could make a living out of motorcycle racing.

When he retired, he did not retire from the motorcycle world. He briefly became a car driver before creating his team. In 1984 his riders raced in the 250cc championship, always supported by his engine manufacturer, Yamaha. He also participated in other motorcycle Championships for several years before shocking the world and leaving the Japanese factory after 25 years of collaboration. Therefore, in 1997, he created his motorcycle brand in England, wanting to take advantage of the geniuses of the Formula 1 engineers willing to help him. Unfortunately, he took too long to develop his machine. He was behind the other manufacturers, which led him to alliances with different factories to help him. Still, he withdrew from the MotoGP competition in 2007 because he lacked the money.

Kenny Roberts is a name that evokes many things but especially changes. He is far from being on the podium of the most successful or breaking records, but he has managed to mark the world of motorcycling. With his three World titles, two National Championships, and his many victories in Europe and the United States during his thirteen-year career, he has put himself in the history books.