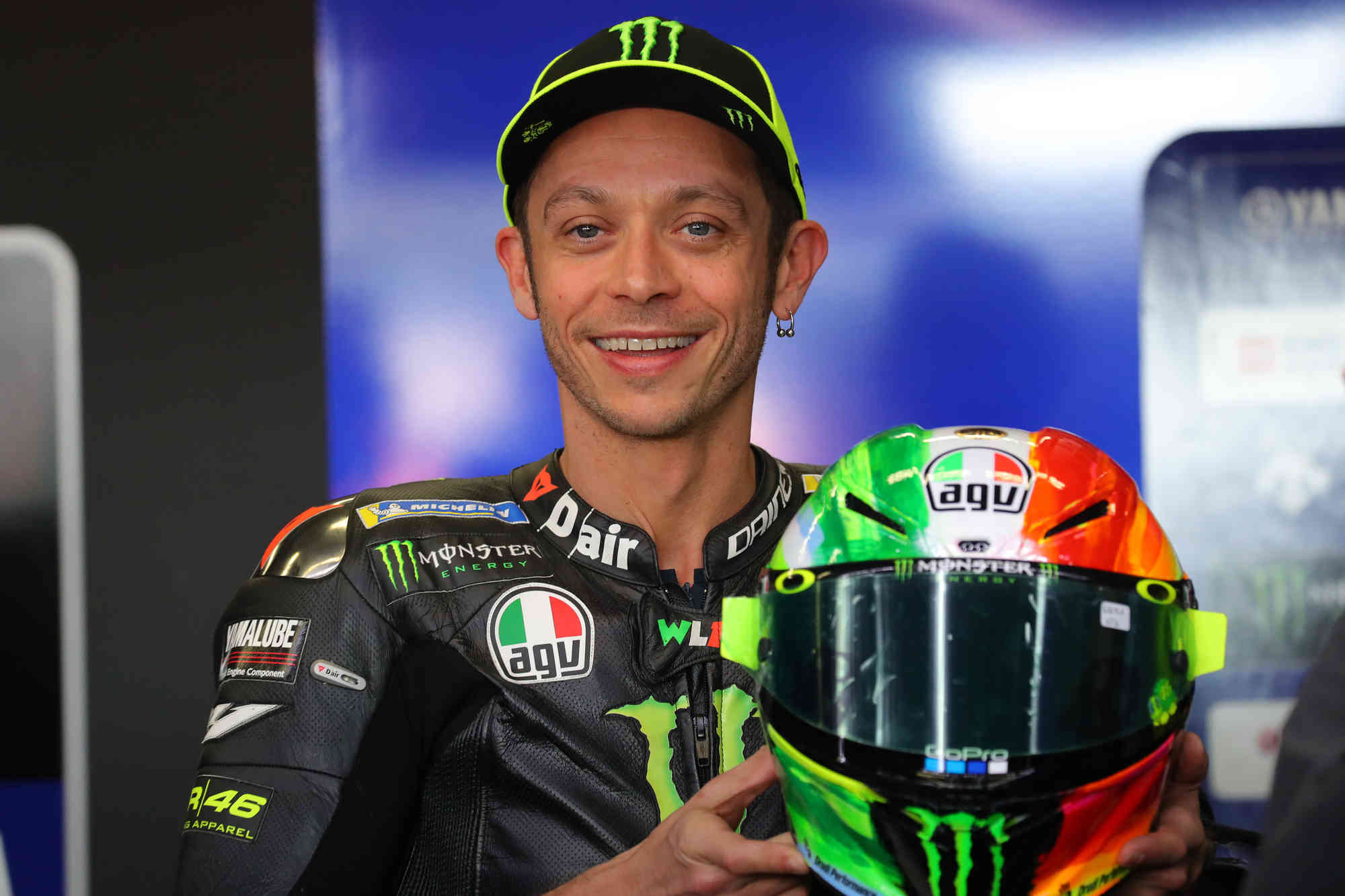 Valentino Rossi, Monster Energy Yamaha in the garage with new helmet during free practice for the Moto GP Oakley Grand Prix of Italy.

"The Doctor," as he is nicknamed, is a former motorcycle rider born in Italy in 1979. Even before his retirement in 2021, he was considered one of the greatest in the discipline.

Valentino Rossi started racing very early, but his first love was not two-wheelers but karting. For several years he will have a promising career in karting, finishing in the top five of the Italian Championship and winning many races. In 1993, Rossi had his first opportunity to ride a 125cc motorcycle thanks to a former Italian champion, Paolo Pileri, now at the head of a team. With a second-class bike during this first year, he did not have a very regular season but managed to score a pole position and a podium in the season's last race.

He was given a factory bike for his second year and won the Sport Production Italian Championship. He gradually rose and continued winning until he appeared on the biggest stage in 1996.

He began to make a name for himself as soon as he arrived with an Aprilia, an Italian brand; in the 150cc World Championship, he dominated and won his first World Title. In 1998 he moved up a category and raced in the 250cc class. The Aprilia was a very good bike, but due to technical problems several times in the season, he missed the Championship by twenty-three points. He won it the following year by dominating and finishing the season with three hundred and nine points and was even crowned before the end of the season because no one was able to catch up with him. And during this season, we could see him dress up as Robin Hood to celebrate wins; with that, the Doctor won the hearts of a lot of motorcycle fans.

After being crowned two times World Champion already, Honda gave him his chance in the highest category, the 500cc at the time. He finished the year second even though it was his first season. It took him some time to adapt to the bike, but after 9 races, he got his first victory.

In his second season, he dominated the Championship and was crowned with, three hundred and twenty-five points, one hundred and six more than the second, a very comfortable lead.

The start of MotoGP

After its title in 2001, the Speed World Championship changed and became what we know today: MotoGP. He will forever be the last to have won the 500cc title and the first to have won the title in the new category. On his Honda, while everyone, including him, tried to understand the new machines, he won 11 races. Thanks to this, he won his fourth Championship. He then dominated until 2006 despite a machine change, from Honda to Yamaha in 2004. He was dethroned in 2006 by Nicky Hayden and Honda, then thanks to the evolution of regulation in 2007, it was Casey Stoner's turn. Rossi and Yamaha won two more titles in 2008 and 2009 before never winning again because two Spanish stars emerged, Marc Marquez and Jorge Lorenzo. Despite everything, the Doctor will remain at the front of the stage. He gathered thousands of fans over the years, but also because he continued to play pole positions, victories, and podiums until 2017 when he won his last race and got on his final podium in 2020 in Jerez, where he finished 3rd.

He continued to race despite his decline in the Championship because, as said many times, he "will stay as long as he takes pleasure" he is also known for his adaptability. During his many years of competition, he had to change his riding style several times. For example, he popularized the fact of putting the leg out before a turn as a breaking zone mark, which is still used today. In 2021 he announced at a special press conference that he would retire to dedicate himself to his family life and participate in car endurance racing.

Rossi did not wait for new Italian drivers to arrive; he recruited them himself and took them under his wing. In 2014 he created the VR46 academy in his village of Tavullia. It gives these young riders a dirt track training ground called The Ranch and privileged access to the Mugello racetrack located right next door. In addition to the advice he gives, they are well surrounded by a staff that helps them with their careers. Thanks to this academy, the Doctor created his team first with a smaller engine capacity and since 2021 in MotoGP. The VR46 has seen several riders like Romano Fenati, Andrea Migno, Lorenzo Della Porta, Celestino Vietti, and Franco Morbidelli, who today is alongside Fabio Quartararo in the Yamaha team; or Rossi's his half-brother Luca Marini who now competes in MotoGP in his brother's team. But perhaps the most notorious of his youngsters is the vice World Champion Francesco Bagnaia, who in the lower categories managed to shine and has been fighting for two seasons on the official Ducati to get the title.